I've gotten the chance to help out on a project called CadHub. CadHub is an online editor for 3D modeling, which is trying to generate the friendliness and community that CodePen brought to frontend web development for the small world of "Code-CAD". Code-CAD is a set of technologies that allow users to create 3D models by writing in programming languages like JavaScript and Python, instead of traditional point-and-click interfaces that exist in most 3D modeling software. While these Code-CAD packages have been around for a long time, it has historically been difficult to get started using them, requiring installation of tools and multi-step setup to get running smoothly. CadHub's editor lets these packages be tried out in a live editor in the browser, and be shared with a simple link.

What I've been up to

My first contribution was this feature that lets you take a screenshot of your project and save it to your profile. It was fun process and my first time helping out on an open source project. Big thanks to Kurt Hutten (@Irev-dev) for being such a welcoming host. The idea of open source development has been this scary monolith to me for some time and he managed to make me feel like I was hacking away on just another personal project, and walk me through the process of PR reviews and code linting best practices with Prettier. 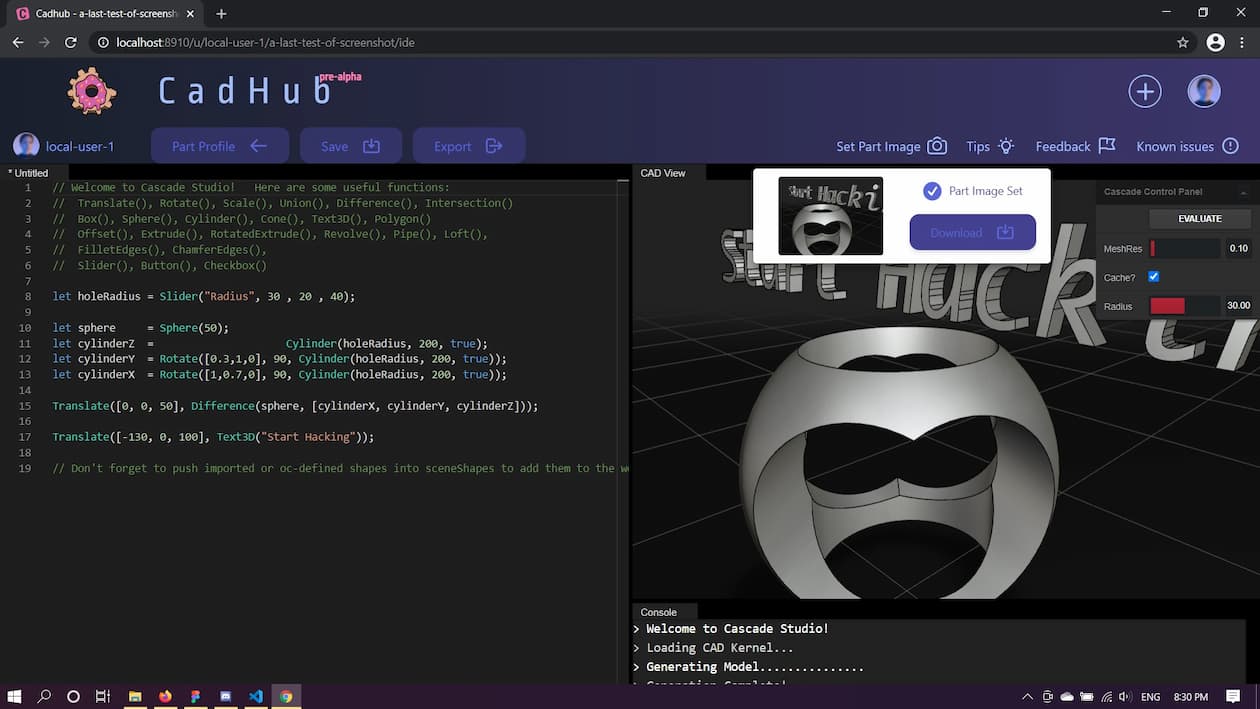 Since then I've been hooked, and I've become one of the core contributors on the project.

My initial work with Kurt was to make the leap to a custom editor and an app architecture that treated different CAD packages as plugins. We are so happy with how that process has turned out, because since then contributors from 3 of the most used Code-CAD packages—CadQuery, OpenSCAD, and JSCAD—have been able to integrate into CadHub. This means that users can now try out 3D modeling in three completely different languages all in the same place!

My ongoing work has been leading UX design for the platform, which you can check out within our Figma project. Kurt did an excellent job getting everything up and running in the core of the project, so my work has been about finding a way to pull all that personality along as we redesign into a full-fledged social productivity app in the same family as CodeSandbox and CodePen.

In addition, I have been helping by taking notes in our weekly meetings with contributors and CAD package maintainers as we continue to refine the core platform. I am excited for this next phase of the project because we are nearing a threshold where we are no longer just creating a playground for these tools to be tried out, but instead are actively helping to evolve the way they are used.

We recently released a customizer tool for OpenSCAD projects that promises to be everything the Thingiverse customizer (RIP) was supposed to be. Not only that, but the maintainers of our other integrations are adapting them to be able to support similar customizer functionality! That means soon whether you write in C++-like code with OpenSCAD, Python with CadQuery, or JavaScript with JSCAD, you'll be able to have similar customizable parameters for people to tweak, with a slick UI for them right on the web! 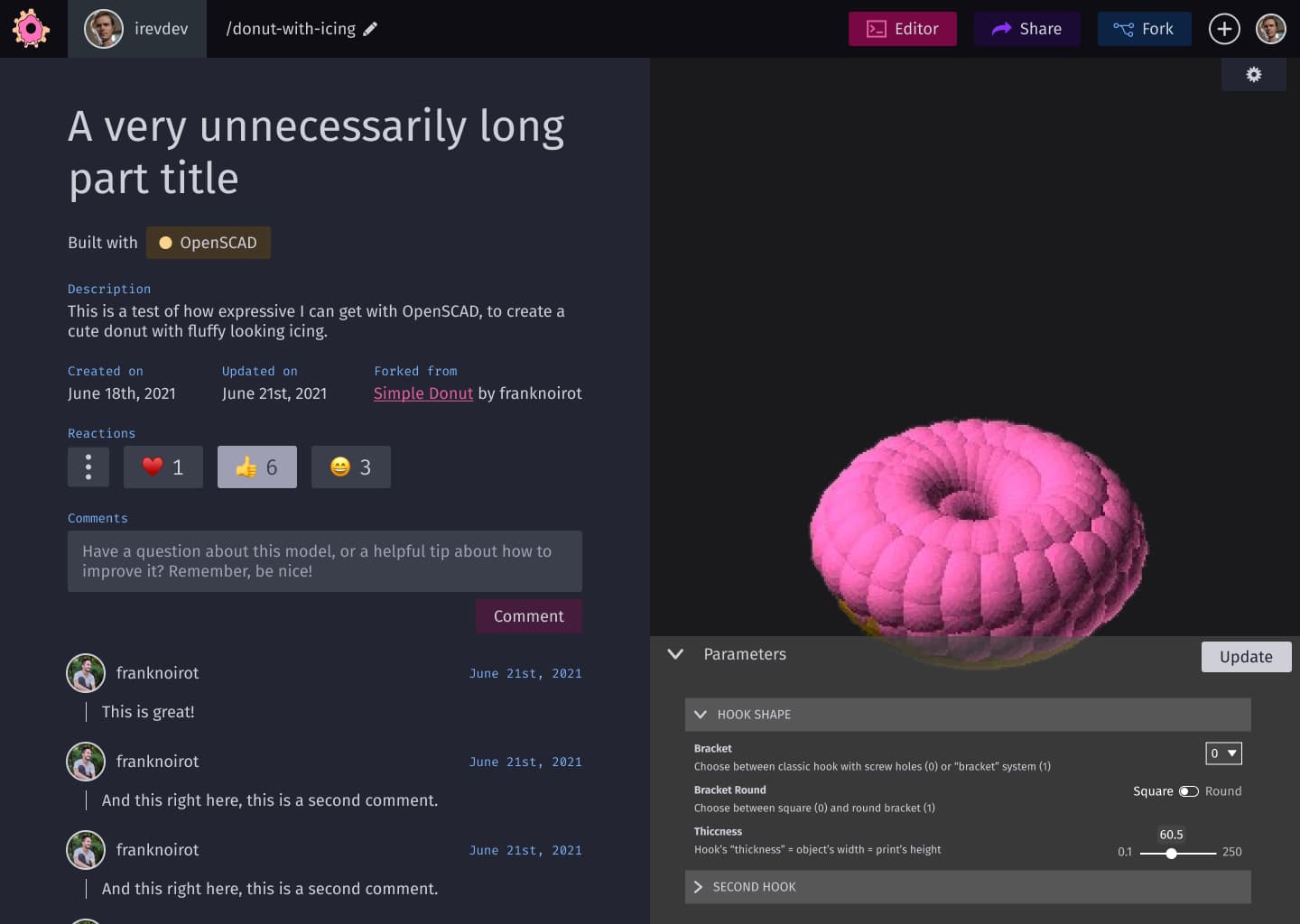 Bringing code back to CAD

Computer-Aided Design software is historically interesting because though the first CAD programs were script first, and often had no real visual interface, they quickly adopted 3D visualization technology as soon as it became available. It makes sense given the visual nature of modeling, but the Code-CAD community believes that by going fully GUI-based meant most CAD software threw out the best parts of script-based interaction. Abstracting parts into functions, creating truly parametric designs, and even embedding logic into your 3D models could be possible if you attach a programming language to 3D modeling software.

Even ignoring those advanced possibilities, Code-CAD offers a compelling user story for beginners as well. The tangible feedback of a 3D modeling visualizer makes Code-CAD a great tool for people just learning coding, 3D modeling, or both. A straightforward language like OpenSCAD lets users type in cube(); and see a cube right away, immediately showing them how their inputs influence the program. I do UX design for a living and upon describing my 3D modeling hobby to my roommate using CadHub, he replied that it was the first time he's really understood any of my web explanations.

Now with the advent of fast 3D rendering on the web thanks to the maturity of software like WebGL and modern GPUs, true 3D modeling in the browser is very much possible. And if a community site like CadHub can make sharing and collaborating on 3D models easier and more fun, we might see a whole new generation of designers and developers pop up, just like CodePen gave me my first taste of web development 5 years ago.

If you're interested in 3D modeling, Code-CAD, and the social web, please join us over at the CadHub GitHub and Discord. We've built our own IDE that runs OpenSCAD in the browser, and makes GitHub-backed, shareable CAD projects a reality. And thanks to the efforts of dedicated colleagues, we've integrated support for CadQuey, JSCAD, and Curv. That's 4 different CAD packages plugging into the same web editor!